Legislative and judicial activities during the week of December 16, 2019 produced significant developments with the Affordable Care Act (ACA). On December 18, the United States Court of Appeals for the Fifth Circuit issued a ruling in Texas v. United States finding the ACA’s individual mandate to be unconstitutional, and on December 19, Congress passed a spending bill that contains the full repeal of three ACA taxes. These developments will have a disparate effect on employers.

The spending deal approved by Congress and later signed by President Trump provides government funding and addresses numerous policy initiatives. One part of the spending package contains the repeal of three ACA taxes: the Cadillac tax, the medical device tax, and the health insurance tax. While the repeals are unsurprising, they signal a considerable loss of funding intended to help pay for health coverage expansion under the ACA.

The medical device tax is a 2.3% excise tax on the gross sales of medical devices, such as pacemakers, x-ray machines, and other hospital equipment. The tax took effect in 2013 and was shortly thereafter suspended by Congress. The tax has not been in effect since 2016 and will be repealed as of January 1, 2020.

The health insurance tax applies to health insurers that offer individual and group medical insurance policies, as well as public programs like Medicaid and Medicare. Though the tax applies directly to insurers, most carriers build the amount of the tax into insurance policy premiums, effectively passing the cost on to employers and individuals. Because of this adverse impact on premiums, the tax was twice suspended in 2017 and 2019. Unlike the Cadillac and medical device taxes, repeal of the health insurance tax will not take effect until 2021. Consequently, insurance premiums for 2020 will continue to reflect the cost of this tax.

In the case of Texas v. United States, the United States Court of Appeals for the Fifth Circuit upheld the district court’s 2018 ruling that the ACA’s individual mandate is unconstitutional. The plaintiffs argued that because the individual mandate penalty was reduced to $0, it is no longer a tax as originally characterized by the U.S. Supreme Court and therefore violates the Constitution.

The appellate court declined to rule on other issues previously raised by the district court, including the question of whether the individual mandate can be severed from the rest of the ACA or whether the entirety of the law will be invalid without it. Instead, the appellate court sent the case back to the district court to determine if any other provisions of the ACA should be struck down along with the individual mandate.

What this Means for Employers

Employers may experience some relief from the repeal of the ACA taxes. Sponsors of insured health plans can anticipate potentially lower premiums beginning in 2021 due to the absence of the built-in cost of the health insurance tax, and sponsors of high-value coverage can continue to offer rich plans free from imposition of an excise tax into 2022.

However, the impact of the court decision in Texas v. United States will take longer to become clear. Though the ruling does deem the individual mandate unconstitutional, all other aspects of the ACA remain in full effect pending further analysis – including the employer shared responsibility provisions and reporting obligations under Internal Revenue Code Sections 6055 and 6056. Additionally, the defendants in the case have signaled that they are prepared to take the unfavorable ruling to the U.S. Supreme Court, which would dramatically lengthen this judicial process.

Importantly, the court’s ruling on the constitutionality of the ACA’s individual mandate has no impact on similar laws enacted by some states, such as California and Massachusetts. Employers (and individuals) in these states should be mindful of the requirements that will continue to be imposed under such laws. 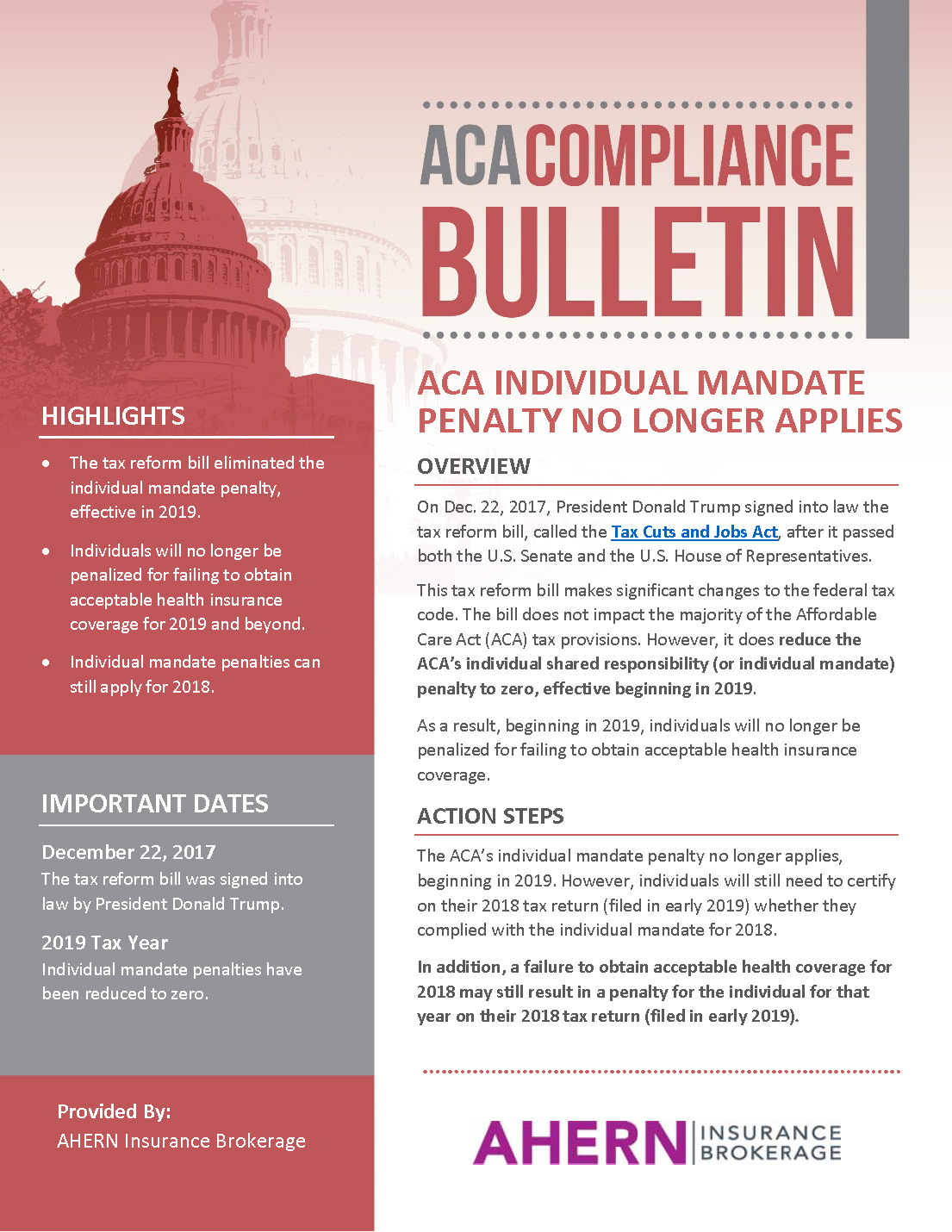 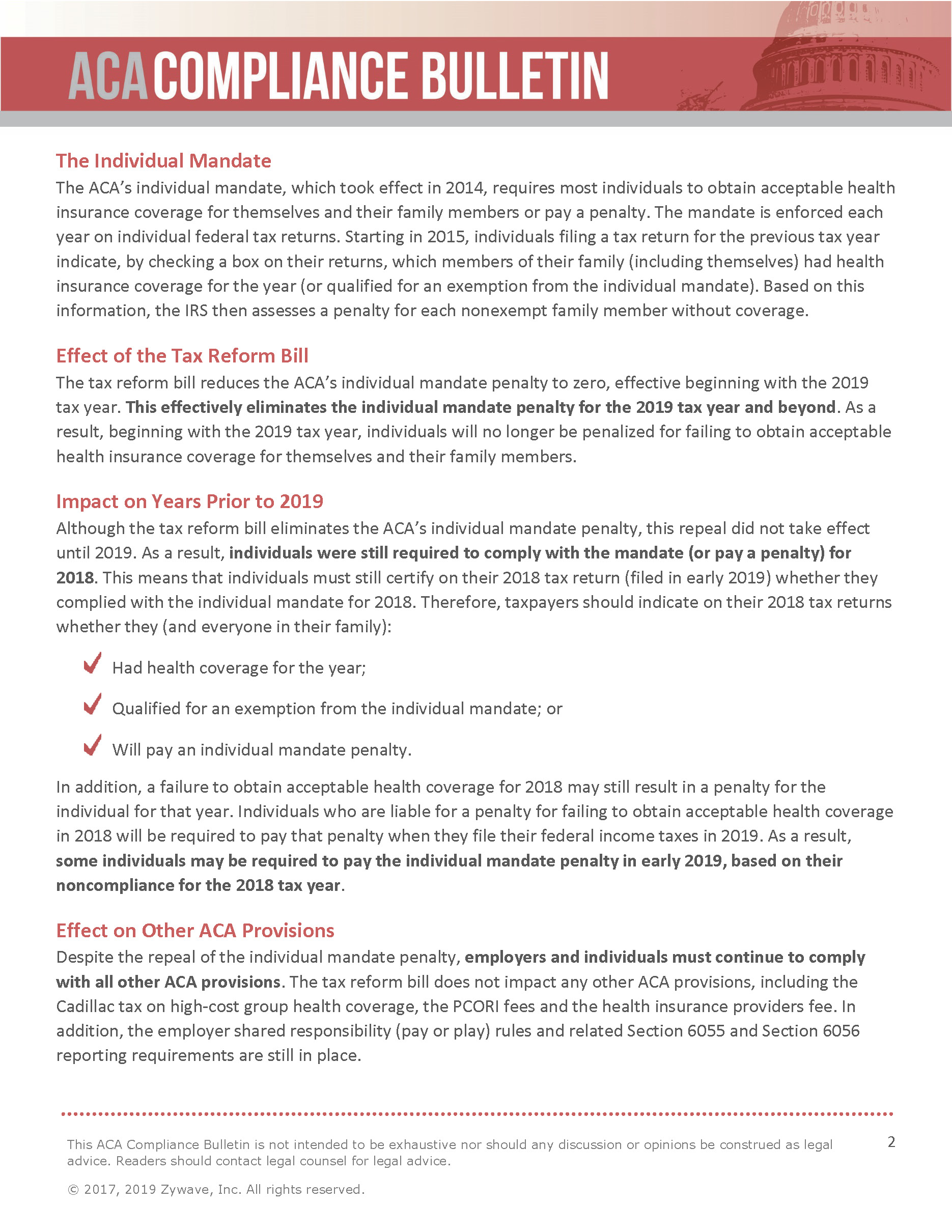 The ACA’s individual mandate penalty no longer applies, beginning in 2019.  To download a copy of this ACA Compliance Bulletin, please click here.

We know that this time of the year is always extremely busy for everyone, so we wanted to be sure to let everyone know about our in-house Employee Benefits team.

Many of you may be working through your health insurance renewal or waiting fearfully for it to hit your desk!  If so, our dedicated team of experts is here to help ease your burden and find creative solutions to help mitigate your renewal increase.

Our AHERN Benefits team can not only help with your core offering like medical insurance, but also a wide array of solutions, including:

If we can answer any questions or be of any assistance throughout the year, please do not hesitate to contact Reid A. Middleton, JD, Executive Vice President of Employee Benefits, at rmiddleton@aherninsurance.com or (858) 514-7132.

Our own Reid Middleton, JD., will be speaking to the HR Section of the Greater Los Angeles Chapter of the Association of Legal Administrators on Thursday, November 30, 2017.

Reid’s presentation entitled, “2017 & Beyond… What’s Next for the Affordable Care Act?”, will cover the state of the insurance industry and discuss the efforts to repeal and replace the Affordable Care Act (ACA), the growth of the Professional Employer Organization (PEO), new benefit designs and strategies and a California Legislative Update.

Please click here for more information on how to register for this event. 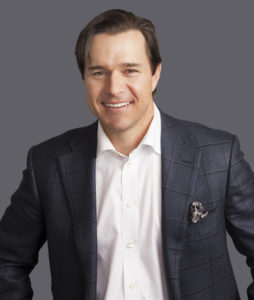 On November 2, the Internal Revenue Service (IRS) issued revised FAQs on the employer shared responsibility provisions under the Affordable Care Act (ACA). Question sets 55-58 now detail the procedure the IRS will use to begin issuing proposed penalty assessments to employers that failed to comply with these provisions in 2015. Though the IRS was previously silent on the details of penalty assessments, this new information serves as a reminder to employers that compliance enforcement is a priority for the IRS.

Just hours after being sworn into office, President Donald Trump signed an executive order directing the federal regulatory agencies responsible for enforcing the Affordable Care Act “to the maximum extent permitted by law” to “exercise all authority and discretion available to them to waive, defer, grant exemptions from, or delay the implementation of any provision or requirement of the Act that would impose a fiscal burden on any State or a cost, fee, tax, penalty, or regulatory burden on individuals, families, healthcare providers, health insurers, patients, recipients of healthcare services, purchasers of health insurance, or makers of medical devices, products, or medications.”

So what does the order really mean?

Is ACA compliance on your list of New Year’s resolutions? This handy Compliance Checklist is designed to provide a brief overview of the key ACA compliance requirements and action items so you can prepare to comply in 2017.